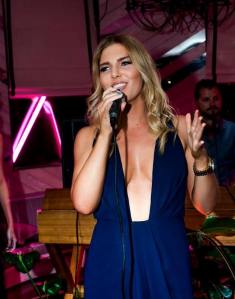 Lauren Sampson, the New Zealand born sensational singer and songwriter has launched her latest EP and Official Video of Broken Queen. The event was held at one of the sophisticated and elegant venue- The Haus – 5-9 Roslyn St Potts Point NSW 2011 on 28th August 2015 organised by Tessabella & Co and hosted by Tammy Bartaia, an International actress, TV Presenter, and Model. (Left: Photo by Cyclone Imaging)

Having released three impressive singles – ‘Into You’, ‘Aiming at the Sun’, and ‘Broken Queen’ along with music video for her debut single ‘Into You,’ Lauren has received immense support with her first two tracks being played on both NZ radio and national television. On Friday, the 28th of August, Lauren unleashed her talented vocals to a scintillating live performance.

So passionate has Lauren been about music that she started taking lessons in singing and studying music at the very tender age of 12, and carefully nursed her desire for singing throughout her schooling. Her talent, kept forever maturing as she took on singing and song writing roles in various music groups and bands. However, the longing for something more to further fulfil her lifelong dream as an artist found her on a one-way flight to Sydney.

Lauren considers Sia, Beyoncé, Lana Del Rey as the biggest sources of her musical inspiration. She was candid in sharing some of the secrets of her skyrocketing career within the film industry. On being asked to describe her sensuous voice, she said, “expressive, emotive, sassy, empowering, and flirtatious.” When asked about her personal philosophy in life, “My philosophy is ‘to be kind’ and ‘to do today what is to be done”. In five years’ time, Lauren will be seen touring internationally. “In addition to music, I love acting and modelling and I love to travel,” she confided.

Lauren is passionate about her latest video.
“There is a story behind Broken Queen song. It is about empowering woman to be strong, confident, independent, and to be successful in their own right. We have worked really hard to make sure the video showcases the true meaning behind the song, and I’m really happy with the results,” says Lauren.

The stunning Curzon Hall provided the set for the filming of Broken Queen. Directed by Amy Nelson-Blain, the clip was choreographed by the wonderful Audrey Estelle, whose creative vision transformed the clip into a real masterpiece. Featuring in the clip are Actors/Dancers Jesse Ravenscroft, Max Nguyen, and Gerard Villar Assens. Lauren and her amazing crew were supported by the very talented Kayla Boydas, Stylist; Tiffany Vassilakoglou, Hair and Makeup Artist; Benjamin Cao, Assistant & BTS photographer, and Daniel Cheung, Assistant Videographer. 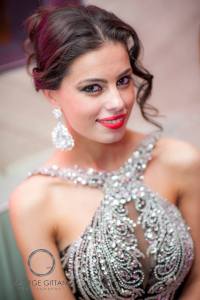 Tammy Bartaia, the host of the event at The Haus, is an International actress, TV Presenter, and Model, needs no introduction. Tammy has appeared in numerous TV commercials and campaigns for brands such as the Hilton Hotel, Samsung, Foster’s beer and TV show ‘Four Weddings’ on Channel 7. Tammy is a celebrity with intelligence, beauty, style, drive, and determination. Her latest film ‘Unindian’, an Australian-Indian romantic comedy, is soon to be released in cinemas. (Photo by: George Gittany)

Tammy’s stunning natural beauty and classy style, apart from fascinating International and local fashion designers, have even inspired the great internationally renowned Australian painter, Charles Billich that he created a masterpiece of her image, currently on display at the Billich Art Gallery, The Rocks Sydney.

The event was DJed by the illustrious Ilker Aydin, who having attained phenomenal success in performing in many clubs and hotels in Europe including one of the biggest night club “Halikarnas,” has established his own recording label, MIT RECORDS. He is also famed for playing at all Ministry of Sounds events in Turkey.(Left: Photo by George Gittany)

The EP and Official Video Launch was a great success, a night of music, fun and connection (Above: Photo by Klikz)

Broken Queen video is now out on youtube…..watch it here!